Posted by neromir on July 7, 2014
Posted in: Weekly posts: neromir. Leave a Comment 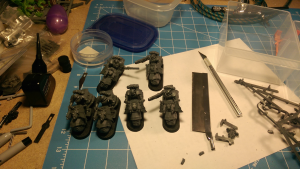 Finally got these guys done. Had to do a bit of conversion work to get some of them to come off right. The guy I bought these from on eBay sent me two sergeants. Fortunately, I’d already gotten a Raven Wing command squad box to do my captain on bike, so I had an extra biker I could substitute in for the sixth. The bike and legs for the extra sergeant will be combining, along with some other handy parts from the command squad box, into a librarian on bike.