I finished with the detail on the priest. I like playing around with different ways to apply rust, and the method I tried out on this guy work out really well. I used rust pigments, and then sprayed on a matte acrylic coating. Before I’ve done it with rubbing alcohol, which worked well enough, but I think using the acrylic worked out better. 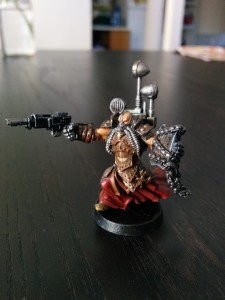 Edit: I should mention that this was my paint project for August. Not as much as say, a guardsman squad. In the meantime, I’ve been priming tons of other models for later. My backlog is so immense that a fair amount of time needs to be spent just prepping my other models. I easily have well over 2000 points of models to still assemble, let alone the rest that need to be painted >.<