I decided to give these guys black guns instead of the green ones the other guys I’ve painted were given. It’s an experiment to give a bit more diversity to the model. Also, I would think the munitorium wouldn’t care much about guardsmen lasrifle colors, so long as they aren’t Slaanesh pink.

All that’s left with these guys is to drybrush, wash, and add the white to the imperial symbols. My project for next month will probably be another infantry unit, but probably not guardsmen. 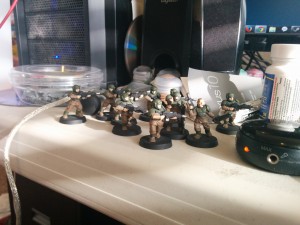